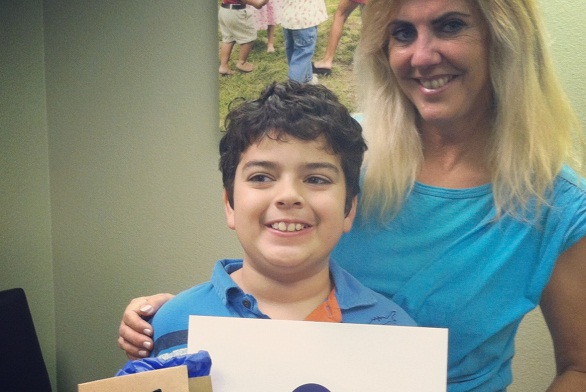 From all of us at Coast Music Therapy, Carson you are a shining star!

We appreciate your confidence, kindness, sense of humor, and natural ability to “feel” the music. We like that you aren’t afraid to show your improvisational skills and make Miss Veronica laugh out loud! We look forward to watching you continue to grow as a musician.

1) What Carson is listening to now: He really enjoys singing along to some of the Power Ranger theme songs (and even sings in Japanese sometimes — just amazing to hear how long he’s singing out with the music videos — in a foreign language!) He likes the soundtracks from other movies and shows as well.

2) What music makes Carson happy? He does enjoy upbeat songs such as the soundtracks from Power Rangers and Cloudy with A Chance of Meatballs. He loves to sing the “It’s Raining Sunshine” song with lots of enthusiasm.

3) If Carson had a band what would it be called?: The Carsonators. His friends from school came to his birthday party and when they had to form teams for a game, they called themselves the “Carsonators” — which everybody thought was a good name! They ended up “winning” so guess it was a good pick after all.

4) What is his favorite part about his sessions with Miss Veronica? Carson has really enjoyed playing the keyboard and the drums with Ms. Veronica and she even thinks he has a good singing voice. He quickly adapted to understanding the notes that go with the keys and is also picking up rhythms and timing as well — the drums help reinforce this. Every time he sees a drum of any kind now, he wants to run over and tap out some rhythms! He is proud of his budding abilities and looks forward to his lesson each week with Ms. Veronica.

We have told people about his sponsor and mentor Joel Anderson and we are sincerely hoping he can follow Joel’s footsteps. It would be great to see Carson playing in a band one day. He does love the limelight and would have no trouble being a “showman”! Now he just needs to build the skills to get there. With Ms. Veronica and Coast Music Therapy’s help, made possible by Joel and his scholarship, we are hoping to get there one day — hopefully before long! 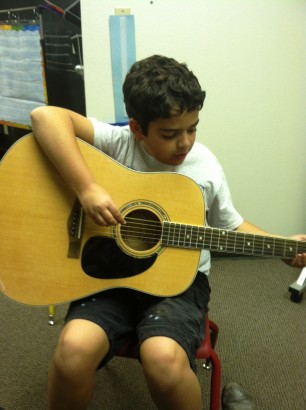