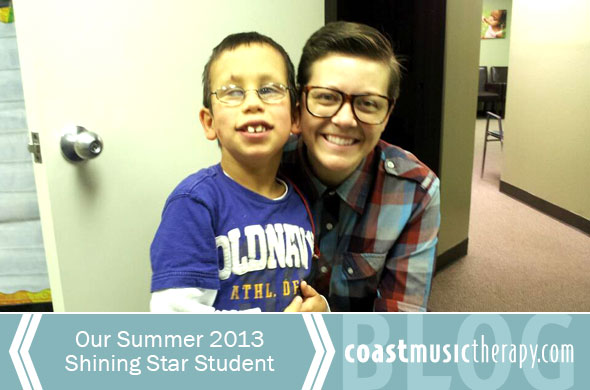 Veronica May, MT-BC, music therapist to our wonderful student Raymond shares her accolades for all he has accomplished.

I have watched Raymond grow as a person. I have known him for quite some time now. He is such a character with a very dry sense of humor. I’m always so excited to share 30 minutes of time with him when he comes to see me. While his communication is different, it is in no way “less.” I love speaking with Raymond in the way we both know how: through our music. I’m so proud of him and he most certainly is a bright and shining star. Good job, Raymond!

Raymond’s super-mom, Sheila, talked to us about his musical must-haves…

What is Raymond listening to now?

Raymond loves his classical music the most, but also loves children’s songs especially if the Wiggles are singing them. Children singing is also appealing.

If Raymond had a band he’d call it?

Probably the Wiggles or SuperGrovers.

What is Raymond’s favorite part about his sessions with Talia and/or Veronica?

Raymond loves the “Knock knock song” and the song that involves spinning. Raymond loves Veronica so much and enjoys watching her videos on Facebook or on YouTube.

Raymond was presented with this awesome keepsake from Karin Brown, the artist behind Something Promised. The plaque reads: I love speaking with Raymond in the way we both know how…through our music. 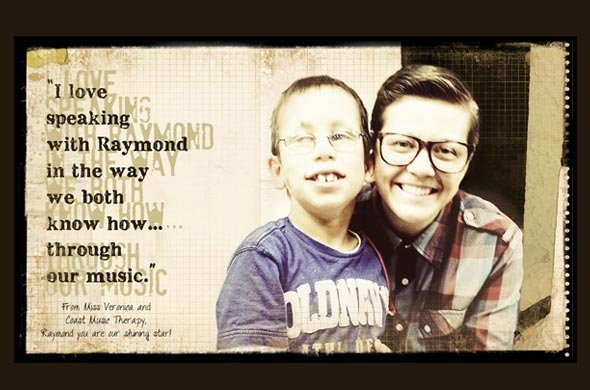